The gaming franchise has announced the launch times through Twitter

Assassin’s Creed has provided us memorable gaming experience. The Ubisoft production, designed by the Milan and Montreal team has been on phones, Android, iOS, the Xbox, Microsoft Windows, and the Sony PlayStation. The action-adventure packed gaming series therefore launched its twelfth major installment, Assassin’s Creed Valhalla

Succeeding Assassin’s Creed Odyssey, Valhalla came on the 10th of November 2020. Along with its presence in the PS4, Xbox One, the Ubisoft production is also available in the new PS5 and the Xbox X and S series. Google Stadia users also get a version. 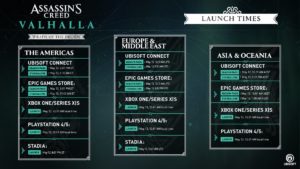 It’s May the 13th. Assassin’s Creed Valhalla: Wrath of the Druids is finally here. The new DLC brings out the era of the Vikings, and England’s political melting pot. Wrath of the Druids DLC takes Evior to Ireland’s rolling hills, marking the Druids as the stand-out enemies. Looking at the anticipation, Assassin’s Creed finally released the launch timings of the DLC across the world. Here are the launch timing updates:

Players looking from EPIC Games Store would get their hands on Season Pass at 8:01 PM (ET) while Standalone would be available from 13th May, as Epic would bring out the same at 11:00 AM (ET.)

Console gamers like Xbox and PlayStation will get their hands on the DLC at 12:01 AM local time, on the 13th of May.

Europe and the Middle East

Europe and Middle Eastern users would see Ubisoft Connect releasing the Season Pass on May 13th at 12:01 AM (UTC) and the Standalone in the morning at 9:00 AM (UTC.)

If you are looking from EPIC Games Store, Season Pass will be in your hands from 12:01 AM (UTC) while from 3:00 PM, Standalone would be available.

Ubisoft Connect will release the Season Pass for gamers from Asia and Oceania at 10:01 AEST on May 13th while the Standalone comes out at 7:00 PM (AEST.)

EPIC Games Store users, Season Pass will be in your hands from 10:01 AM (AEST) while Standalone would be available the next day, on May 14th at 1:00 AM (AEST).

All console gamers like Xbox One, X and S series and PS4, PS5 gamers, DLC access would be available on the 13th of May at 12:01 AM local time.

Subscribe to DigiStatement, for the latest updates on mods, new released and error fixes.

GTA Glitches May 2021: How To Get The Stun Gun in GTA Online