ASRock has registered a line of motherboards based on A520 chipset to EEC.

The hardware market has been buzzing with new leaks and announcements every day. You have NVIDIA launching its new GeForce RTX series. Intel coming to the mix, with the news of its Xe-HPG rumoured GPU. We also came across Tachyum boasting about its universal processor, Prodigy. Then we had AMD bringing in the excitement with what could prove to be a GeForce killer, the Big Navi GPU. But, if you thought AMD rest its case there, you misinterpreted their intentions.

Taiwan-based electronics manufacturer, ASRock Inc. are working on AMD’s new motherboard designs as per various sources. These will be entry-level motherboards built on A520 chipsets. It is suspected that the company will launch about 5 of these. For now, only the Pro-4 Series has been made public via a few leaks. The A520 chipset happens to be the immediate junior to AMD’s B550. It misses out on features like CPU overclocking and lacking on PCle Gen 4 support. There are doubts on whether the introduction of these A520 chipsets will also mark the end of the A320, that has certainly come of age. 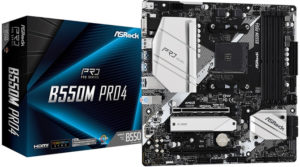 The motherboards sighted are suspected to be the A520M Pro4 and A520M-ITX/ac, the former being a Micro-ATX board, the latter a Mini-ITX board. Most brands use the budget-friendly range to extend their customer base and use it to capitalize the ones ready to make big investments. AMD is no different. The B550 aren’t too heavy on pocket as well, but the market has all sorts of consumers, some too strict on their budget, some flexible.