Apple TV refers to a streaming media player. This means it takes content from the internet and displays it on your TV. Apple TV 4K models support 4K Ultra HD and HDR video. Apart from that, the Apple TV HD supports 1080p HD. The 4K model has some higher-end tech specs for wireless, ethernet and much more. Both the models have a dedicated app store. They have a TV app that offers guide and search capabilities among various popular apps. There are Siri voice capabilities for search and other functions.

The remotes have been made with a touchpad to swipe along with buttons, volume buttons, and Bluetooth and can be used as a motion controller for compatible video games. It works with third-party controllers for sophisticated gaming. It can be paired with Apple AirPad and AirPad Pro headphones for private listening. Along with Apple’s own digital video options, the device supports most of the top entertainment providers like Netflix, Amazon Prime Video, Hulu, HBO Max, YouTube, and much more.

Currently, Apple does not have a list of apps it supports on its website. If you want to check if a certain streaming content provider is available, just check Google with the name of the provider plus Apple TV. 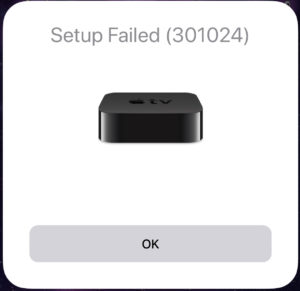 Now Apple TV users have recently reported a problem related to Apple TV. Users have complained that they have been experiencing an error called the error code 301024. The error is mainly related to the setup of Apple TV and the error appears mainly during setup.

A user said that he used his iPhone, signed in with his Apple ID. But then he received an error message which said ‘Setup Failed (301024). Try again later.’ There was also another error message on screen which said ‘This Apple TV needs to be authorized to join your Home. It will check with a trusted iOS device to proceed.’ A user of AirPlay 2 has also reported a similar issue. A few users who were successfully able to finish the setup since the beginning have also reported the same problem.

In case if you are facing the same problem, there are a few things you can try to fix the problem by yourself –

Clash of Clans Facebook friends not showing in 2021 : How to fix it ?