Apple Music refers to a premium music streaming service. It has more than 50 million songs available to stream from the cloud. Apple Music hosts several free internet radio stations broadcasting 24 hours a day in over 160 countries all around the world. The service was launched in 2015 after Beats was acquired by Apple, and replaced the company’s budding Beats Music service. Apple Music has been termed as a one-stop-shop for all the music streaming needs.

The service gives you access to an extensive library of songs along with your own personal library of purchased music from iTunes through iCloud integration. When iTunes was phased out with the release of macOS Catalina in mid-2019, Apple Music was made the default music app on all Apple devices. The service initially received mixed responses because of an unintuitive UI. But over the last few years, Apple Music has grown into a major player in the music streaming wars.

Apple Music has been incorporated into Apple One along with Apple TV Plus and others. It will also play a bigger part in Apple’s wider subscription service strategy. The service includes Apple Music for Artists where musicians can tap into Apple’s data and see how their music is performing all around the world. 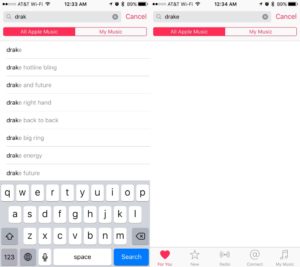 Users have also complained that in some cases when they try to search their choice of track, the page keeps on loading for several minutes and not a single result is shown up. People said that their internet connection is fine and other apps are working except the search option of Apple Music. If you are also facing a similar type of problem, there are a few things you can try to fix by yourself –