I’m sure the biggest question that might be wandering around in your mind is ‘When is the Adopt me Ocean update is releasing.” Well, we have some good news! Read our blog to know more about the new Adopt me Ocean Egg update release date. 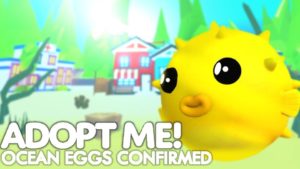 Adopt Me is one of the many games available on the Roblox online platform. Roblox’s Adopt Me is a multiplayer online video game. The game initially started as a roleplaying game in which players played the roles of either parent who adopt a child or children who are adopted by parents. However, the game’s designers wanted to change the game’s emphasis to a pet-oriented game in which players would adopt and care for virtual pets. The game is also known for updating itself on a regular basis to keep players entertained and hooked to the game.

Fans of Adopt Me are in for a pleasant surprise. There have been leaks regarding the game’s expansion of Ocean Eggs update surfacing through the internet.

In recent news, the release of the Ocean Egg has been officially leaked by Adopt Me. The recent post by Adopt Me confirmed the Ocean deck which was earlier leaked by hackers online. You can actually check the Adopt Me Ocean deck in their rent Twitter post. The brand new Ocean deck seems like a storage container or a modern-style house in the theme of an ocean. The official name of the house hasn’t been confirmed yet but is rumored to be titled as the Shipping container house or the modern house. Fans were expecting an underwater house in the new update which doesn’t seem to be happening right now.

In another leak, a character was seen holding a Starfish pet. Also, a shark fin was seen in the same picture that confirms the Ocean Egg update. The shark pet can also be seen in the recent post by Adopt me on Twitter. Interestingly, a shark model was leaked online by someone but was also removed after a while.

The online leaks and the teasers by Adopt Me suggest that the new Ocean Egg update is on its way. The update is likely to be released by the end of April or early May.

The fans of Adopt Me are really excited and are hoping for a treat!