Let the trumpets blow! Its official finally Uesugi confessed his feelings and became a man apparently though yeah he is male still that confession though. Everyone tried their best in this last festival saga. But the story had its own twist. Efforts of each quintuplet were paid fairly well. Not romantically though but now most of them know what to do next. Itsuki

In the previous chapter, we see Uesugi picking Yotsuba’s room and thus moving on this chapter showcased all the things that Yotsuba has said and done till now. Uesugi apparently for now still doesn’t know that the actual Rena he met five years ago is Yotsuba or did he knew it all along and played? The fact that he chose Yotsuba and acknowledged her selflessness and love for her sisters tells us how insightful he actually is. 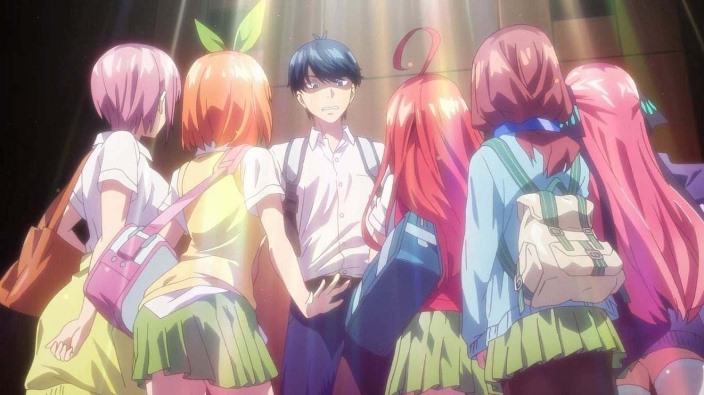 We see that at first Yotsuba avoided him saying there must be a better option and tried to run away. In a chain of events, Yotsuba is finally caught by Uesugi by sprinting and sliding and grabbing her leg. He got tripped over and thus grabbed her leg. And he acknowledges her efforts and support saying he would have faltered and fallen down without her. Then the moment came she finally confesses after he asks her to stay by his side. Well, such pure love is rare.

Focusing on the story now what do you think will transpire afterwards. In the previous chapter, we saw the other quintuplets two crying and Ichika carrying orange juice which in the Ichika’s side chapter we saw indicating Yotsuba by her and Nino crying, Miku pondering and Itsuki saying it’s just the beginning. As we all know she is too stubborn to quit and Miku also now has a new resolve and would Nino really let go?

Well, looking at the pattern each volume starts and ends with the same characters. So we might actually see Yotsuba as the bride.

Stay tuned and find out in the next chapters of this final volume. Till then keep flooding the comments section with your theories.