Looks like Tiger Lake is going to bring some impressive performance

Intel has been struggling to maintain its dominance in performance for a while now. While the company continues to make billions and still is highly profitable, it has fallen behind its rivals in certain areas. After being stuck on the 14nm process for several years, they finally introduced their 10nm chips last year. But it was not enough. AMD’s Ryzen line of processors still managed to beat them in performance. And with the Ryzen 4000 series, AMD managed to surpass Intel in several metrics. But Intel is still a massive company, and fans are more excited than ever to see Team Blue strike back.

Intel announced the Tiger Lake processors for thin and light ultrabooks at CES 2020. The company promised double-digit performance improvement thanks to its new Xe graphics architecture. The chipset doubles the graphics performance compared to the earlier generation, enabling casual gaming on thin-and-light laptops. They also include integrated Thunderbolt 4 and Wi-Fi 6 support.

And today, we get to learn more about what we kind of performance we can expect from these chips thanks to leaker TUM_APISAK. He has spotted the Intel Core i3-1115G4 in SiSoftware’s database. The CPU has been spotted with a highly impressive base clock of 3GHz. Keep in mind that these CPUs have been designed for thin and light laptops. For comparison, the Ice Lake-based Core i3-1005G1 only managed to hit a 1.2GHz base clock.

Looking at his Twitter post, we are also able to glean some more information. It will be a 4-thread processor with 2 cores. The L3 cache has been increased from 4MB to 6MB. Combined with the new Xe graphics architecture, we should expect significant CPU and GPU performance increase. And now we just have to wait to find out how these processors will stack up against the Ryzen 4000 series. 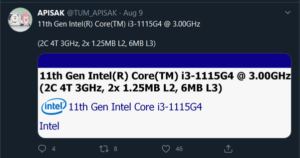